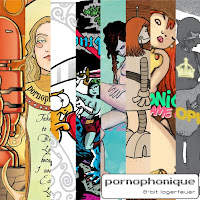 Following up on two themes, robots and Jamendo, here is a track that I've been listening to for quite some time and have neglected to post.  Sad Robot is a track off of Pornophonic's 2007 release 8-bit lagerfeuer.  It has lots of tasty components for me: 8-bit samples, robots, and catchy progressions.  Also a good album cover -- we shouldn't judge a book entirely by its cover, but a good one is sure hard not to pick up in the first place.

Sad Robot, Pornophonique
Posted by subsystem7 at 11:42 AM