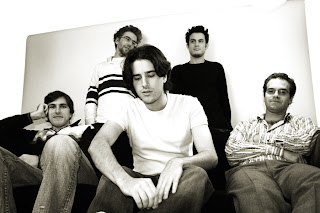 Oh Jamendo! How sweet your constant stream of new music is. I found WhiteRoom, an indie band from Montreal, just a few days ago while doing my rounds. WhiteRoom was officially born in September of 2006 - a good month I might add, as it was also the birth month of a Western Massachusetts Local Currency, BerkShares. The band arose from the creative brains of Alex Dray and Eddy Silva who took their collective years and diverse music interests and turned them into the sonic adventure that you are about to experience.

The track from their self titled album that I chose for today's post is Papillons, I assume after the papillon, a dog marked by its butterfly like ears. This track has all of the energy of a thousand butterflies tempered by mellow vocals and kept steady with skilled instrumentation. The music is tough to nail to a specific genre, the influences being all over the road. 90s pop / break beat / Beatles / Eastern ethnic / ambient piano. Speaking of butterflies, sounds like Joe Frank buried in the background murmuring about white butterflies too beautiful to imagine.

Enjoy this track, and I'd suggest downloading the whole album. Licensed as Attribution, ShareAlike , I hope that somebody takes an interest in a remix or two. Papillons is just a start.

WhiteRoom - Papillons
Posted by subsystem7 at 8:03 AM

We are glad to present the logo for your site.
The logo is situated on URL:
http://2.bp.blogspot.com/_13xCiPnGtxA/RdC1zcfGR2I/AAAAAAAAAA8/CO97UsPqVIU/s1600-h/biotic.jpg

We shall be grateful if you place link about our site URL:
http://www.e-telcards.com/